This year we added Trabanco’s delicious Avalon cider to our drinks menu and in our constant drive to know as much about the ingredients we serve in Camino as possible, we eagerly accepted an invitation to visit their spectacular cider house in Lavandera. This October, thanks to Trabanco and Morgenrot, Richard Bigg and 9 lucky Camino staff members boarded a plane to discover more about the cider culture of Asturias.

Trabanco was founded in 1925 when Emilio Trabanco opened his first cider mill. Many Asturian families used to produce their own cider but Emilio was determined to transform his hobby into a business. The first few harvests were incredibly tough but as time passed Trabanco cider soon became known throughout the region as a premier natural cider. The traditional and natural way of producing cider has been passed down for generations, giving it a rich and special heritage.

The team arrived in Gijón, ready for cider and seafood at El Planeta, an authentic sidrería and restaurant recommended by José Pardo, Trabanco’s Head of International Business Development. Night fell as they reached Plazuela del Marqués and reflections of boats and buildings danced off the moonlit water. They spotted an unusual sculpture which, after a closer look, appeared to be made of cider bottles – 3200 to be precise. Entitled “Árbol de la Sidra” (Cider Tree) it was already apparent how inherently important cider is to Gijón’s culture.

At El Planeta they feasted on delicious croquetas, prawns, squid, octopus and scallops with bottles of Asturian cider. In Gijón you order cider by the litre and as it’s almost entirely flat, the amber liquid needs to be poured from a great height, allowing lots of air bubbles into the drink, releasing the cider’s aromas and taste. Only one or two gulps are poured at once, and should be knocked back in one go. It’s needless to say the table was far from dry by the end of the night! 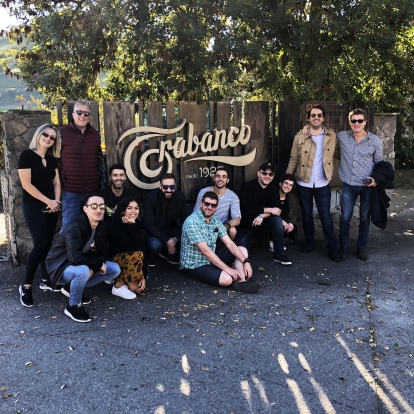 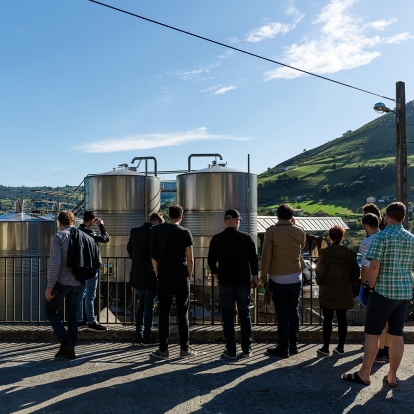 The next day everyone was picked up to visit the Casa Trabanco in Lavandera, just a few kilometres away from Gijón. Casa Trabanco is set in a beautiful green valley surrounded by orchards and the cider is produced in a complex of old stone buildings. José was there to welcome them and begin the tour. First stop they saw the apples being washed, picked through and milled. José explained that the apples are harvested between September and December and then bottled in May. There are around 5000 different apple varieties in the world, 500 of which come from Asturias and Trabanco use up to 70 to produce their cider. Whilst he spoke Emilio Trabanco (next generation) was sweeping away remnants of apple, a testimony to how involved the family are in production. 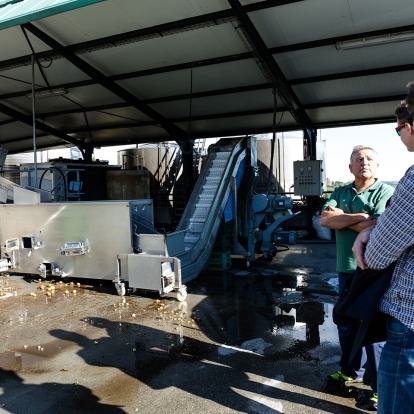 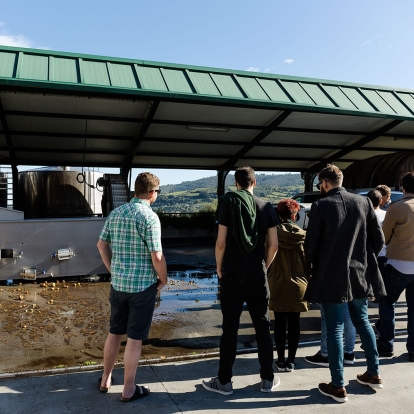 A stone staircase led down to the cider mill where the apples are crushed in wooden tanks to extract their juice. Modern presses can press apples in two hours however Trabanco’s method (since 1925) takes two to three days. A wooden press squeezes the apples then every two hours a member of staff shovels the partially crushed apples back into a heap ready to be pressed again. This method obtains a higher juice percentage (75% opposed to 68% from a modern press) and apples begin oxidising and fermenting during the process giving the cider added richness and nutrients.

Next door to the cider press were rows of magnificent ancient chestnut barrels where the cider ferments between December and May. Everyone tried cider straight from the barrel and had a go at catching it in a glass over a metre away from a small spout. 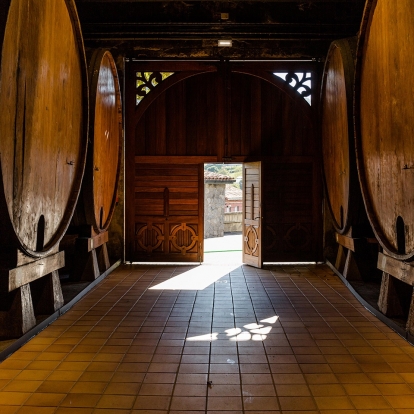 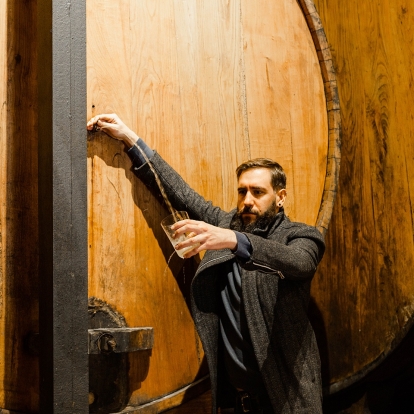 A few gulps of cider and a stroll later, the group came to another cider house containing more barrels and a big surprise. Behind a small door was a tunnel with an incredibly high ceiling which seemed to stretch on forever. José explained that the Trabanco family had discovered this abandoned mining tunnel years ago and had put it to good use by installing what seemed like an endless row of stainless steel deposits for storing cider after the fermentation process. They tasted the cider and unsurprisingly found it had a much more complex flavour, with notes of apple and hints of aromatic herbs. 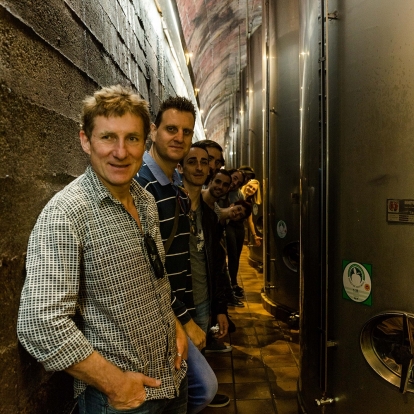 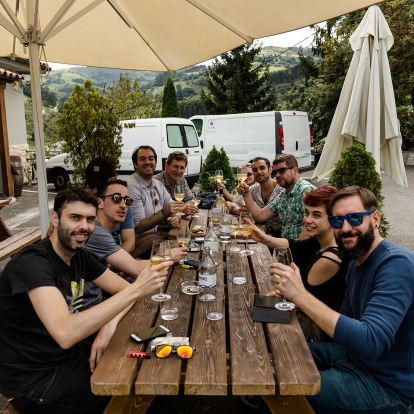 In September Trabanco launched L’Alma, the first ever white vermouth with natural, unfiltered cider and the tour ended with a cheeky glass on the restaurant’s terrace. It was absolutely divine, golden amber in colour, served straight up with ice, an olive and piece of apple. Everyone was fascinated by how balanced the drink was and pleasantly surprised by the aromas of wormwood, orange and apple and the sweet yet acidic taste.

A delicious lunch at Casa Trabanco with José and Trabanco’s Managing Director, Isabel Trabanco followed. Amongst the many dishes on the menu were two regional specialities; Fabada and Bacalao de la Casa. Fabada is a hearty Asturian stew of chorizo, morcilla and butter beans. What sounds like a heavy dish was in fact incredibly delicate and refined in flavour and texture. The Bacalao was melt in the mouth and the sweetness of the onions balanced out the salty flakes of cod perfectly. Meanwhile Trabanco cider was, of course, flowing from great heights. Between the tables there were tall round metal cylinders which acted as a shield for each cider that the waiter pours to minimise the splash. When asked what they were called José replied ‘no me chiscas’ (don’t splash me). 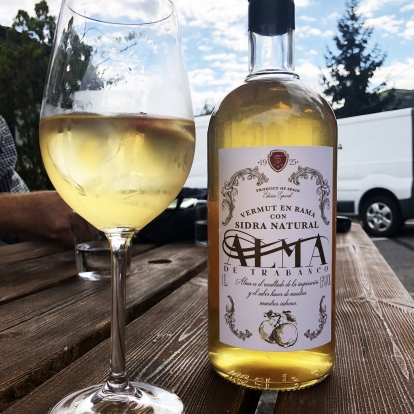 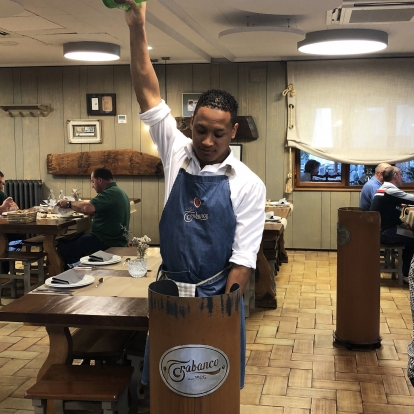 Back in Gijón, everyone walked to the seafront and watched the sun set behind the Estatua de Pelayo. That evening José was taking the group to Tierra Astur to experience dining in a cider barrel. They weren’t sure what to expect but were all blown away by the restaurant’s spectacularly clever design and warm atmosphere. The ceilings were covered in old wooden cider crates, empty green cider bottles and the floor was littered with sawdust to absorb the constant splashing from cider pouring. They were seated in one of the many reconstructed cider barrels which created a very unique and intimate setting. 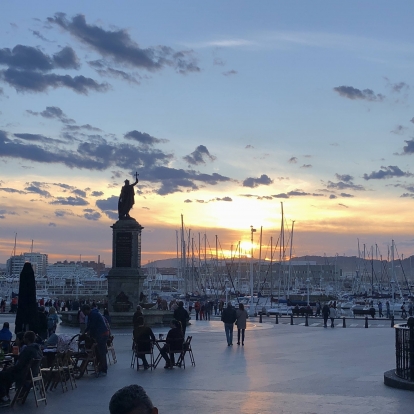 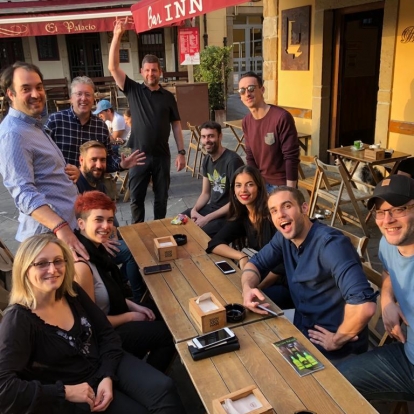 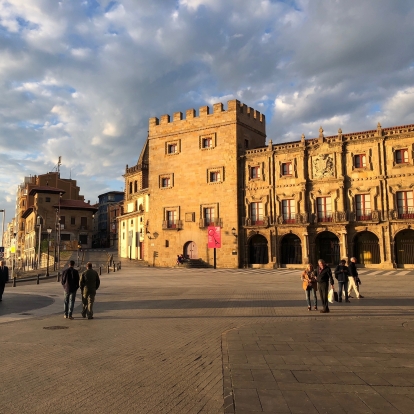 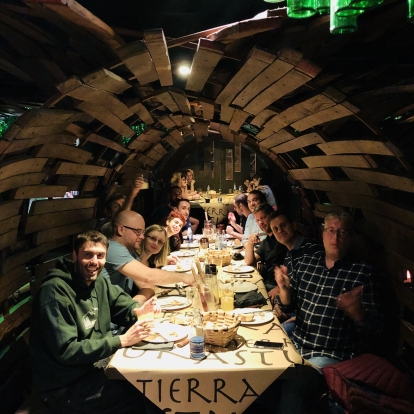 An array of delicious dishes were served with jugs of tasty cider sangria. Cecina and cheeses followed by fried calamari and bacalao, gambas, tortas con picadillo and cachopo. The latter is one of Asturias’ signature dishes and every carnivore’s dream. Two thin steaks of veal sandwiched together with cheese and ham, coated in breadcrumbs and fried. It was certainly a meal to remember!

The whole team left Asturias with a greater understanding of Asturian culture and the story behind Trabanco’s ciders. This valuable knowledge will be passed on to the rest of the Camino team so that we can continue to showcase the gastronomic delights of every Spanish region.

Massive thanks to our genial and generous hosts José Pardo from Trabanco and Simon Tripp and Mat O’Connell from Morgenrot who represent Trabanco in the UK.