The Portobello Brewing Co began 7 years ago when two brewery industry veterans, Rob Jenkins and Joe Laventure, inspired by the creativity and flair of the people and places in and around London’s Portobello Road, decided to set up their very own brewery in the heart of West London. With the help of a fantastic head brewer, Farooq Khalid, they put their own brand of creativity and flair into producing a beautiful variety of pale ales. When it comes to brewing; taste, quality and innovation have always been their top priorities. 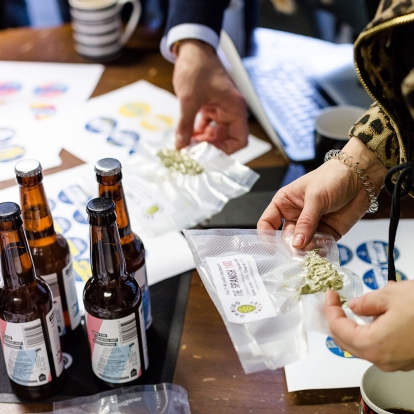 Earlier this year Camino met with Rob, Joe and Daniel Eilenberg, Co-founder of C+IB, to decide on a name for our new Mediterranean bespoke craft beer. Puerto Bello seemed like the perfect play on words, alluding to both the brewery’s name and the port town that lent Portobello Road its name following the Battle of Puerto Bello. The badge design was an easy choice as the turquoise blue and sandy yellow combination perfectly conveys the warmth and atmosphere of the Mediterranean coast.

The next and most crucial task was choosing the Spanish hops. The Portobello team had sourced different varieties of Cascade – the hops most favoured by craft brewers – for our Head of Drinks and Training, Hannah Duffy Russo, to see and smell. Both Joe and Rob rightly pointed out that Spanish beers tend to be stronger which is partly why Camino wanted to create a low ABV (alcohol by volume) beer but with a Spanish twist. Rob added ‘ the craft bars nearly killed me the last time I was in Malaga, I didn’t realise how high the ABV was’. Any beer lover who’s been to Spain will probably sympathise with that.

In the end the Portobello team recommended using British and American Cascade hops during the boiling stage then dry-hopping the beer with Spanish Cascade hops. Dry-hopping elevates the aromatic profile of beer by extracting and retaining as much of the essential oils from the hops as possible, and Cascade hops have a higher proportion of essential oils making them an excellent choice. 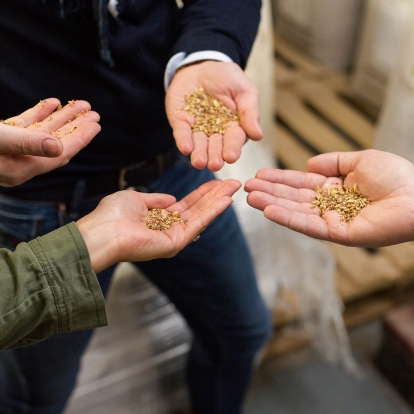 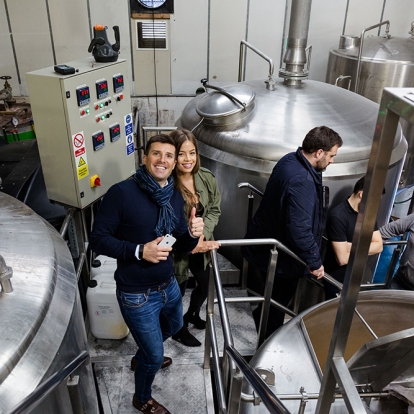 On a mild day in March it was time for Camino to watch their bespoke baby beer being born. Our Executive Chef, Nacho del Campo and a lucky select few went down to Portobello’s HQ where they were warmly welcomed by Rob, Joe and Daniel. Joe took them through Portobello’s story and explained it’s ‘very much a family business – Farooq is actually Rob’s brother-in-law. So we’ve replicated what bigger family brewers do on a smaller scale.’

Farooq Khalid, their talented head brewer, took everyone through to the brewery to begin the tour. He began by distributing handfuls of barley to smell while he described how malted barley is created. They begin by soaking it, causing it to germinate, before stopping the process with heat. The amount of heat applied to the grain has a huge impact on the final brew determining the colour of the liquid and it’s viscosity. The sugars produced by the malt help create a sweet backbone to every brew that provides a foil to the bitter, tart or floral flavours brought by the hops.

The group then had the chance to peer into the mashing tun, where the malt is mixed with hot water to form a mash. Farooq explained that the heat from the water activates the enzymes in the malt, creating sugar. The spent malt is separated from the sugary liquor – called wort – which is then brought to a strong boil for a couple of hours during which they add bittering and aromatic hops at various stages. 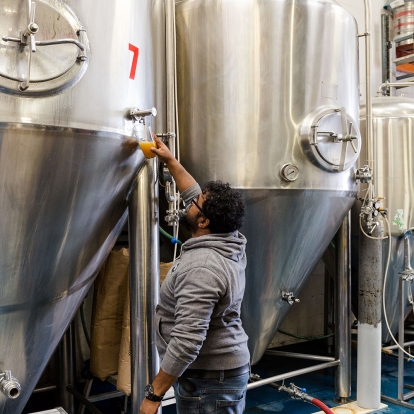 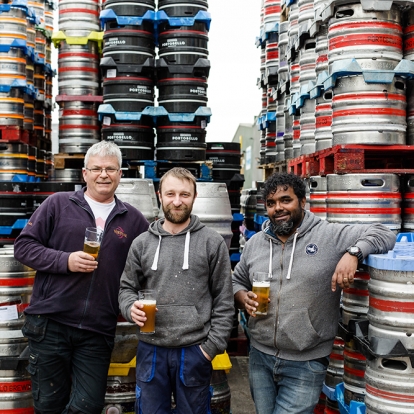 From the base of a metal staircase we looked up and admired the shiny rows of large stainless steel fermenters. This is where they transfer the wort and add yeast to begin the fermentation process. This is the most volatile element of any brew so Farooq ensures they nurture and handle it with care. Once fermentation has finished the beer is left to condition, allowing the remaining yeast to absorb undesirable flavour elements.

Next we were given the chance to see and taste a Portobello pale ale before and after the filtering process. The most striking difference was the appearance. The first sample of beer was cloudy whilst the second was transparent. By filtering and naturally removing the spent yeast, the beer becomes beautifully clear and bright.

Following weeks of hard work, Camino received the delicious fruits of their collaboration. A refreshing and light beer, with a gentle spiciness and a clear bitter. It pairs perfectly with tapas, particularly chorizo Riojano and baby squid. This summer we highly recommend you pull up a chair on one of our sunny terraces, order a few Puerto Bello pints and tuck into some irresistible tapas.

A big thanks to everyone at the Portobello Brewing Co for this amazing collaboration and delicious pale ale!