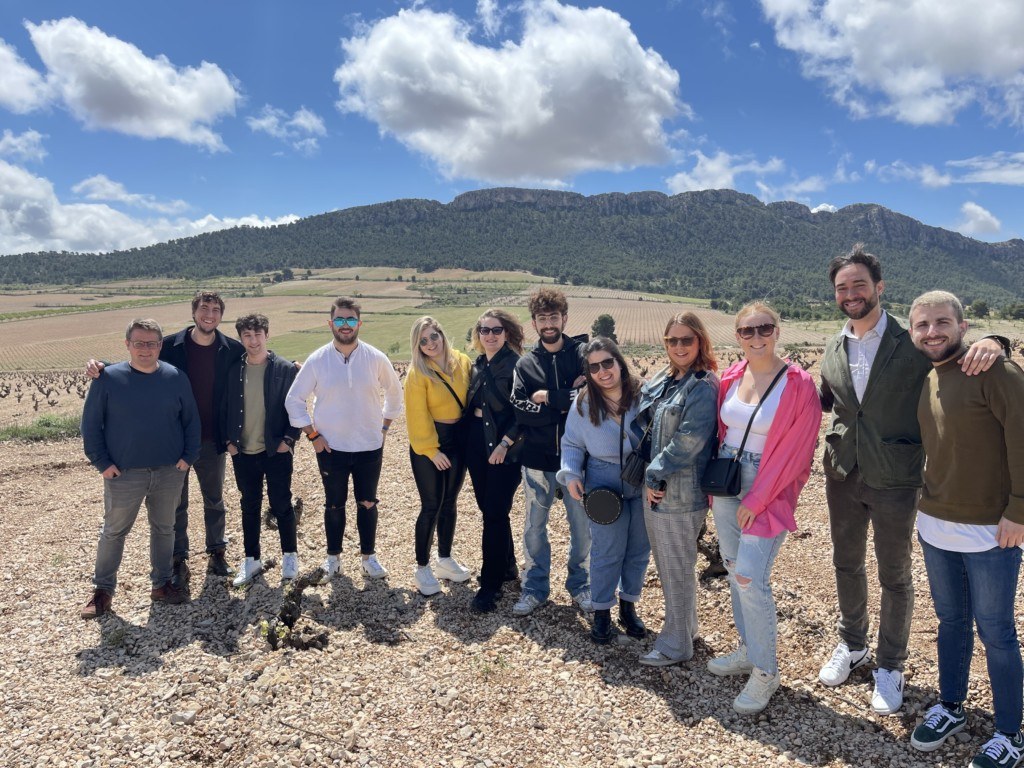 The Gil family estate is made up of ten different artisanal vineyards in many of Spain’s best-known wine regions stretching from Jumilla in the south-west, Priorat and Montsant in the north-east, Rioja, Rueda roughly north central, and Galicia in the far north-west.

Throughout the estate, old vines of native grape varieties have been preserved to share the aromas retained over time; this produces genuine flavours of appellations of origin with their unique local climatic conditions. The first vineyard of the Gil family estate was Juan Gil, Jumilla, where Juan Gil Giménez produced his first harvest in 1916. Since then, over 8 million bottles of wine have been produced from Gil Family vineyards, each wine conveying the extreme conditions of each productive site: the altitude of the terrain, the organic richness of the silt, the winds rushing through the vineyards and above all, the honesty of the winegrower.

After an early start, the mandatory airport pint and a 2-ish hour flight, a very excited team Camino landed in Alicante airport ready to rock and roll. Two cars were waiting to take us straight to the Juan Gil Winery in Jumilla, after roughly an hour of driving through the mountainous landscape of Alicante we reached our destination. Stepping out of the cars and into the picturesque views of hectares and hectares of vineyards it felt like we had been transported into a decadent oil painting. 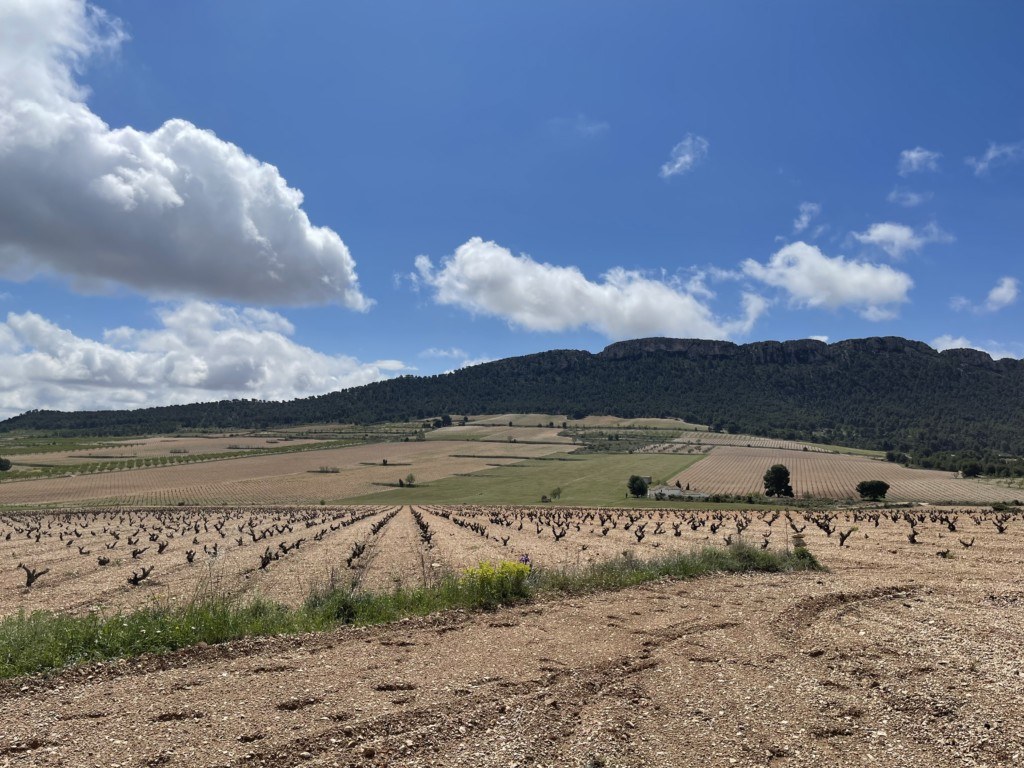 We were greeted by Alberto and María from the winery who would be our guides for the rest of the trip. Formalities completed, we jumped back into the cars and headed 700-850m  above sea level to see the ancient bush vines of the Monastrell grape. Monastrell is typically a warm and concentrated red wine with lots of fresh black fruits and cherry notes. More modern styles will tend to be lighter in style compared to the more traditional high alcohol and high tannin wines of the Monastrell of old. Most include a degree of oak ageing which adds a judicious touch of sweet spice to the wine. 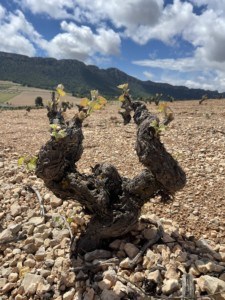 The bush vines ranged between 80-90 years old, producing higher quality and more intense flavour grapes. Due to the unique shape and age of each vine, these must be harvested by hand; hearing about this back-breaking process made us realise just how much hard work goes into viticulture and the wine taste even better.

We then headed off to the bodega, where Alberto guided us through the journey the grape goes on to become wine. For some of us, it was our first ever time seeing this process from start to finish – we were taken aback by the vast fermentation tanks, each holding between 40,000 to 130,000 litres of wine, that’s a maximum of roughly 174,000 bottles of wine! 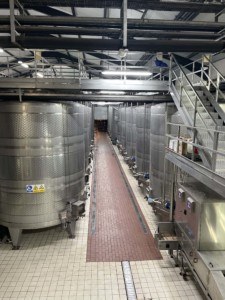 Juan Gil Bodega has nailed the balance between traditional and modern practices. They keep their winemaking in the vineyard traditional with their ancient bush vines, dry farming and harvesting by hand. This is why the Monastrell wines are well-balanced and fresh.

Another tradition which is here to stay is the ageing process which is done using hundreds of oak barrels, adding a balancing note of sweet spice to the wine. 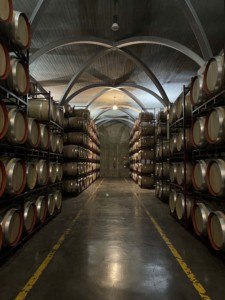 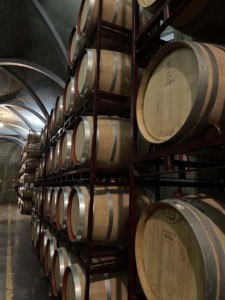 After walking through the bush vines, touring the winery, and delving into the history of Monastrell, it was time to TASTE! 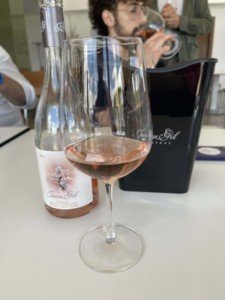 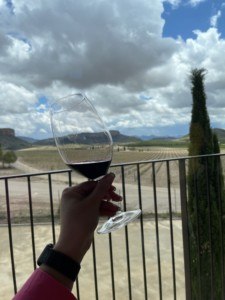 We walked into the tasting room which had been prepared for our arrival, Alberto drew back the blinds to reveal the most extraordinary, breathtaking view.

We started with a selection of whites; A Juan Gil Muscat, Shaya Verdejo and Shaya Sauvignon Blanc and the most beautiful rosé Juan Gil Tempranillo and Syrah. Then we moved over to the reds; Yellow Label, Silver Label, and the luxurious Blue Label. It was so hard to pick a favourite, we were spoiled with such a fantastic selection. Saying that, as red lovers, the Silver Label came out on top, a warm, elegant red with a fine blend of smoke and spice – funnily enough, you can find this bottle in all Camino venues. Next time you’re in and trying to decide on a bottle of wine to go perfectly with some red meat, give this one a go. It tastes even nicer when you can appreciate all the hours of that back-breaking work which goes into it.

The Winery: Lunch and A Sleepy Drive back to Alicante

Feeling nice and warm from our tasting session (spit buckets were provided at the tasting, but not really used…), we moved over to the dining room where Alberto and María had organised a 5-course lunch of traditional Spanish dishes all paired with a variety of wines. Highlights included jamón, a traditional tuna salad, local Spanish cheese with a tomato and pepper sauce, a chef’s special dish with rabbit and snails, and lamb leg with potatoes. All of which were absolutely outstanding – we needed rolling away from the winery. 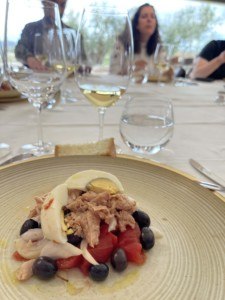 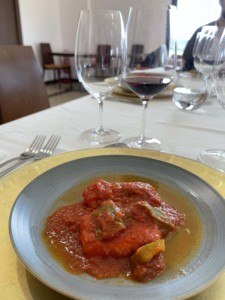 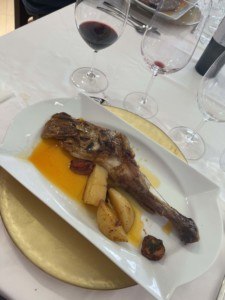 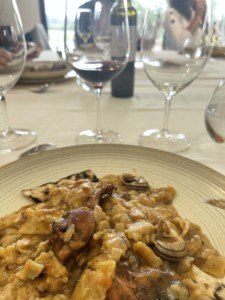 After lunch, we thanked the chefs, said our goodbyes to María and headed back down to Alicante. It’s safe to say the taxi ride was much quieter on the way back down with pretty much everyone taking a food and wine-induced nap (apart from the driver – thankfully!!). We arrived at the most gorgeous hotel, Hotel Hospes Amerigo, we felt like Kevin McCalister in Home Alone 2: Lost in New York.

A quick 45-minute refresh later we met Alberto again in the courtyard bar of the hotel for a quick Madri and Gin & Tonic before heading to La Taberna de Gourmet for dinner. As we walked into the cosy, authentic Alicante wine bar we got an instant feeling that we were in for a treat. Alberto ordered for the table which gave us an element of surprise as each dish arrived. We had a selection of bread and olives; Burrata salad with arugula, pear, cashew nuts and honey; fried artichokes; ’huevos rotos’ (fried eggs with potatoes), chistorra & Padrón peppers; tuna tartare with quinoa salad, wakame, wasabi and soy sauce all with more delicious Juan Gil wines to wash them down. Every single dish was super tasty and for the second time that day we needed rolling away. 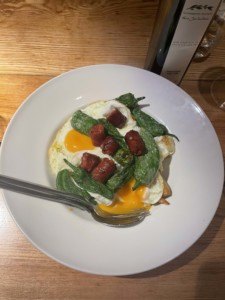 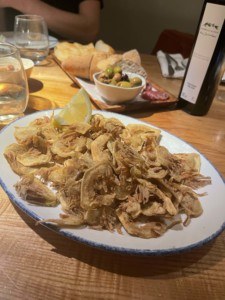 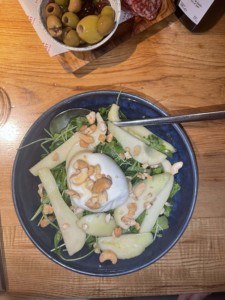 On day two we had some free time in the morning, which a number of us were thankful for after a long day of travel, a lot of food and more wine. We met up at around noon and headed around the corner to Hestia Lucentum for an Alicante Paella experience.

Chef Jaime Seva Lozano started by explaining the differences between traditional (Valencian) paella and Alicante paella. In a traditional Valencian paella, vegetables, meat and fish are really important and give it its yellow colour. Whereas, rice from Alicante has a red colour due to the stock which among locals is called ‘salmorreta’ – a sofrito made of ñora (a typical red pepper), garlic, parsley, tomatoes, olive oil, and lemon juice. 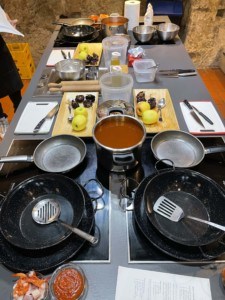 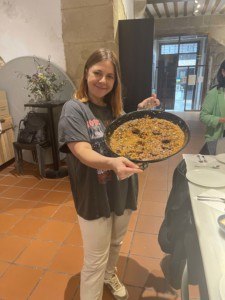 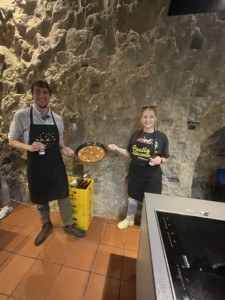 We then cooked up a storm and created our own Alicante paella and a beautiful caramel apple tart, with assistance from Chef Lozano of course. The best part of the day was sitting around the table all together and digging into our creations. 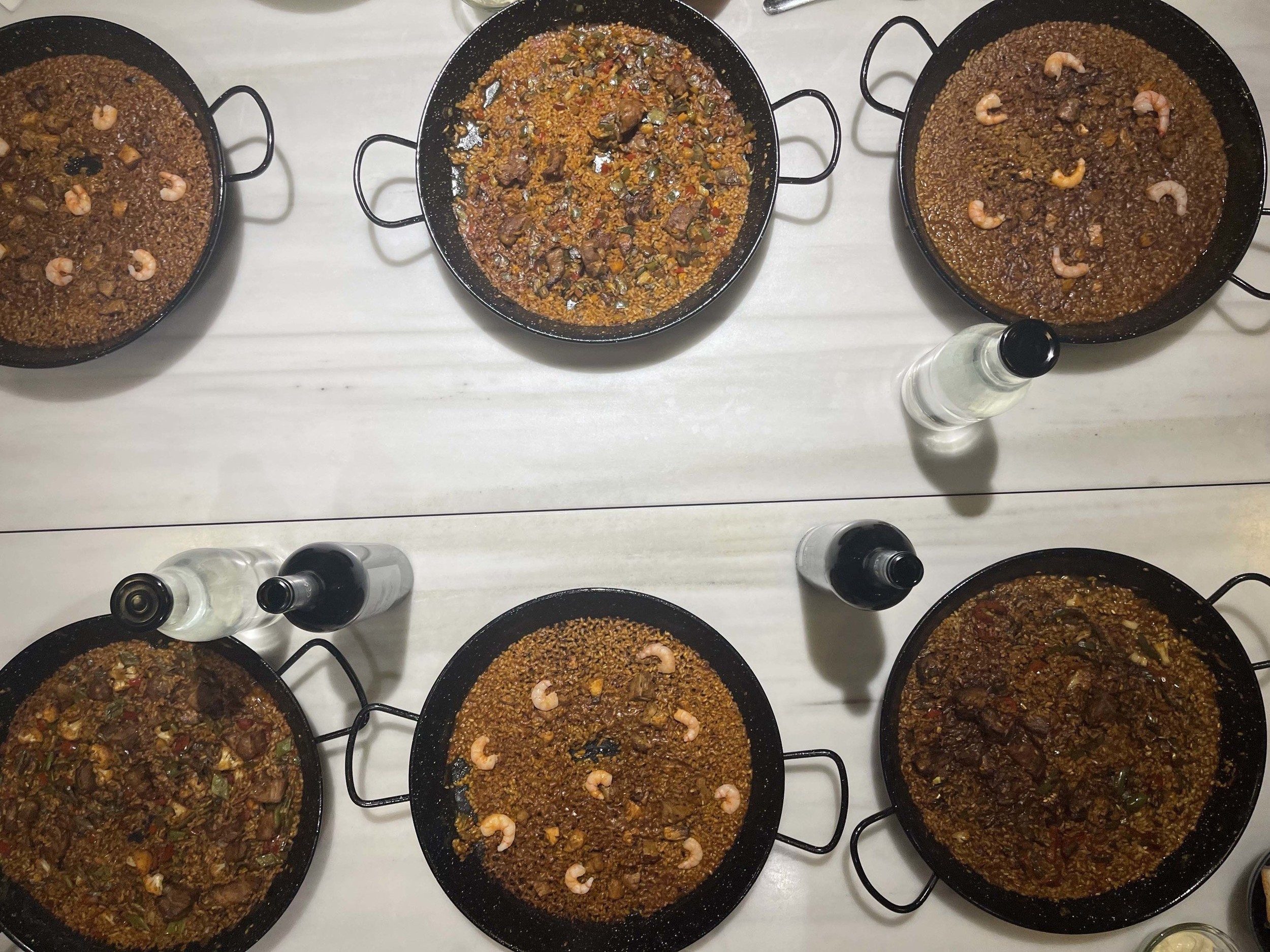 Once again, almost too full to walk, we said our (this time final) goodbyes to Alberto and Chef Lozano and went on our way. We had a few hours to kill before heading to the airport so we took some time to wander the streets of Alicante and explore the beachfront.

The hospitality of Alberto and María is what made the trip unforgettable. Absolutely fantastic hosts with an abundance of knowledge, generosity and kindness. We cannot thank them  enough. The Alicante trip would also not have been possible without Jordan and Enotria, so a huge thank you to you too.